Tests give developers a way to ensure reliability and dramatically improve the quality of third-party development. For the Dynamo project, tests are expected with pull requests to help the Dynamo development team know that a new feature or bug fix is robust. The Dynamo source repository contains thousands of unit tests and is an excellent reference for learning how to write one. The DynamoSamples repository also contains basic examples of tests that we will walk through in this section.

Unit tests are expected when making a pull request to Dynamo and are generally a good practice during development. They need to be included in pull requests for the following reasons:

For example, if another contributor makes a change that causes a node we created to stop functioning properly, it should also cause any tests we created to fail. This helps to eliminate possible causes of an issue and identify its source.

Several libraries are provided with Dynamo that contain base classes and utility methods for testing. If we want to write a test in a package we are developing, we will need to reference the DynamoVisualProgramming.Testing package from the NuGet package manager to get the following libraries:

These libraries contain base classes that will handle operations such as initializing Dynamo and its geometry library for unit tests or providing access to the Dynamo workspace in system tests.

How to run a test

Before we write a test, running one located in Dynamo's source files will illustrate the process and results.

First we need to install the NUnit 2 Test Adapter so that Visual Studio discovers the tests.

In Visual Studio open the Dynamo solution file Dynamo.All.sln and the Test Explorer. Set the test settings to x64 otherwise the tests will not run, then build the solution. 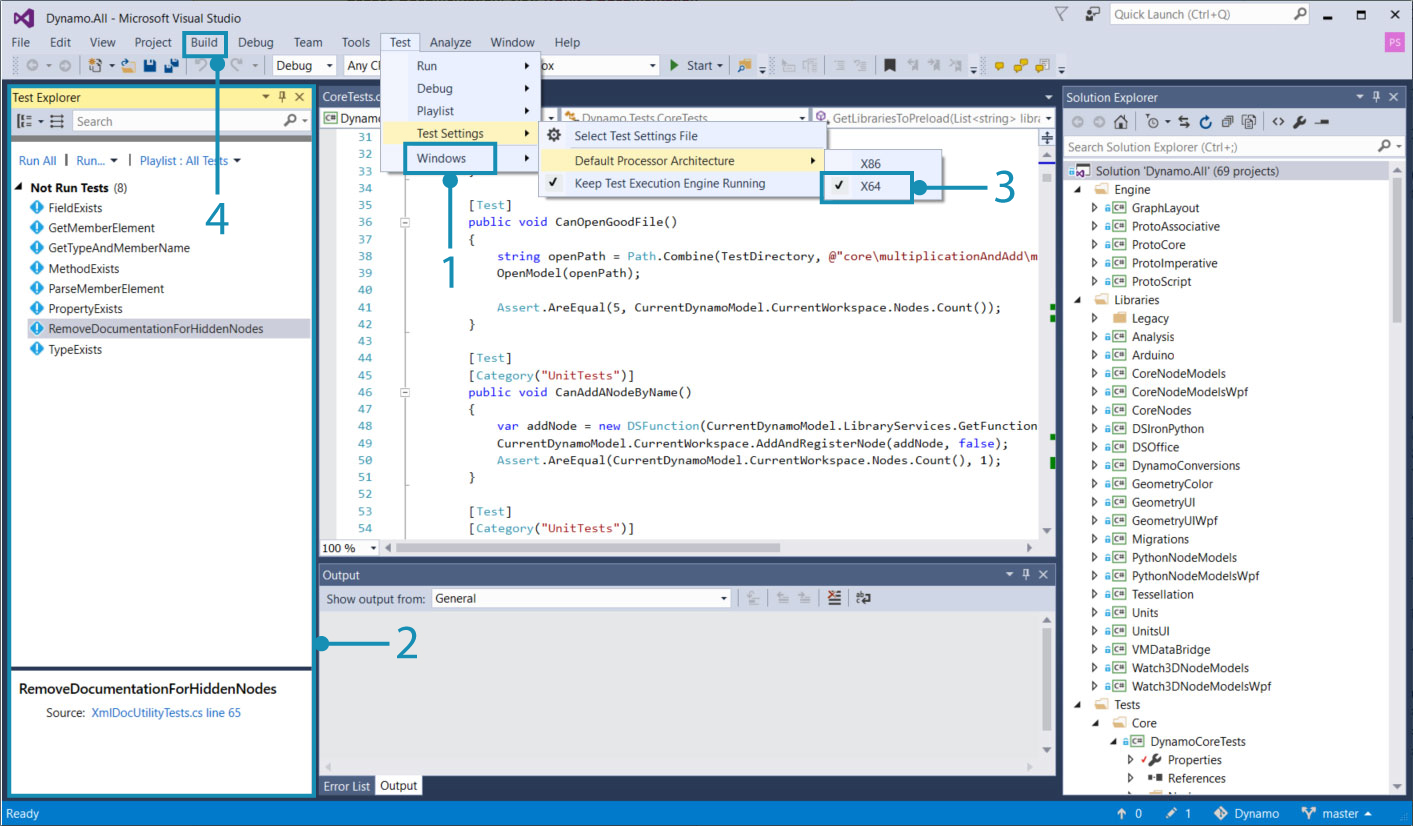 Select a test to run. The CanSaveImage() test from DynamoCoreWpfTests will test Dynamo for whether or not it can save an image. Running the test will open Dynamo, add a node, and capture an image all very quickly.

How to write tests for a package

Most tests we create for packages will be unit tests. They should be small, fast, and reliable. If we want to test a Zero-Touch node, the test should test only that DLL and make calls directly to that code. We will walk through how to set up a package with tests using the the DynamoSamples repository.

Start by downloading the Github repository for DynamoSamples and opening the Visual Studio solution file. We also need to add the Tests package with the NuGet package manager. 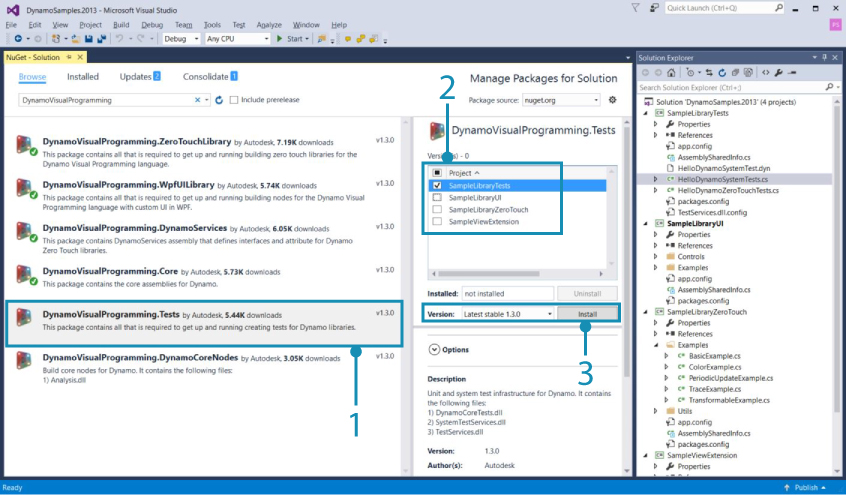 To run tests we need to point the test libraries to Dynamo's installation directory with a TestServices.dll.config file in the SampleTestsLibrary project folder. DynamoSamples already has this file, otherwise we would need to create one.

Now build the solution to get the tests. If we open the Test Explorer window there should be three tests from the SampleLibraryTests project. Tests should be contained in a separate project. If we wanted to test a method in this project, we would need to reference that library in the test project. 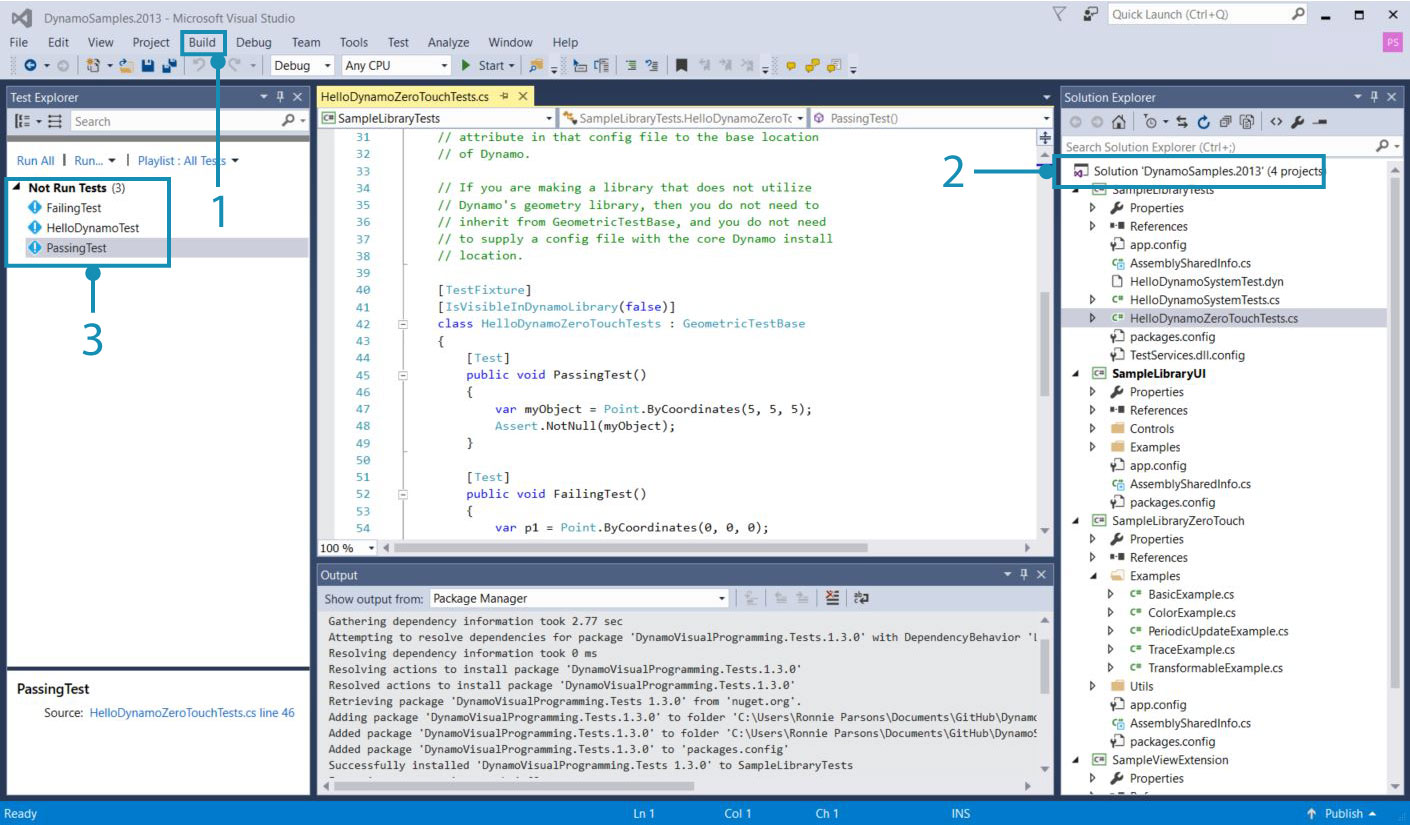 The tests we see in HelloDynamoZeroTouch.cs are very basic but include the key components.

public void FailingTest() tests if Dynamo will throw an exception when the Line.ByStartPointEndPoint(p1,p2) method is given identical points, which is impossible to create a line from.

If we replace the Assert statement in the FailingTest with Assert.NotNull(myObject);, we are testing if Line.ByStartPointEndPoint(p1,p2) can create a line from points in at identical locations. Replace the code and run the test to see what a failure looks like. 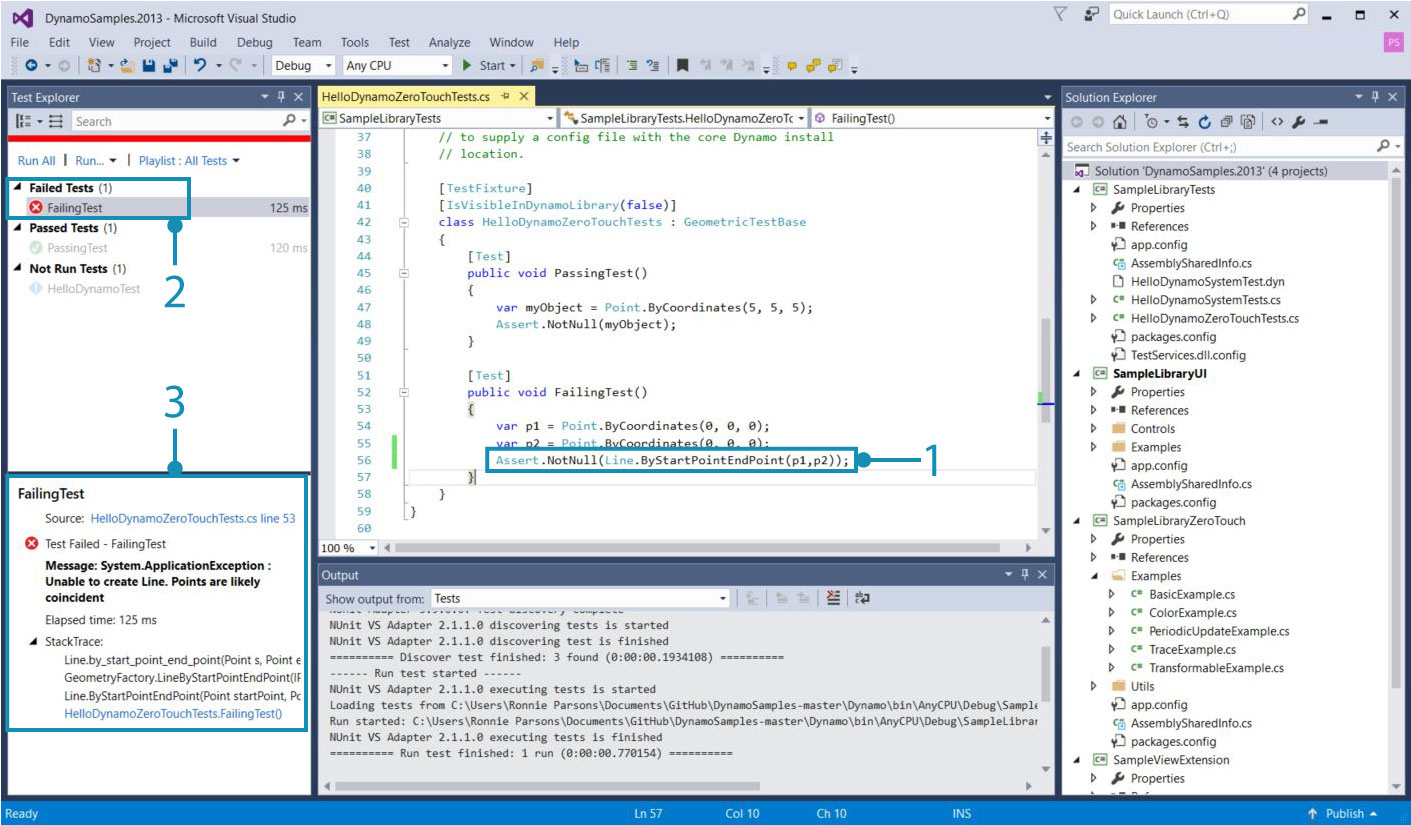 Now we are set up to write tests for any package we create. For an extensive list of reference tests take a look at the Dynamo source.